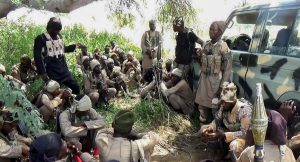 Governor Rotimi Akeredolu of Ondo State has alleged that members of the Islamic State’s West Africa Province have invaded Nigeria.

Following the inauguration of the Ondo State chapter of the Security Network Agency also known as Operation Amotekun on Tuesday, August 11, Akeredolu stated that Amotekun will help fight ISWAP and other terrorists in the region. Speaking on Wednesday during an interview on Channels Television, the governor said, “What we know is that insurgency is already here, ISWAP is already in Nigeria. All of us know and these people have tendencies of issue of territory.”

According to him, the terrorist group have dominated a particular region and are waiting patiently until they are strong. That will be their launching pad.

“Some of us believe that those who involve in kidnapping are not necessarily herders, those who are Fulani herdsmen,” Akeredolu noted.

To further back his claims, Akeredolu noted that some persons recently caught could not even communicate in any of the Nigerian languages.

He said, “A number of people we have found in recent time don’t even speak any Nigeria languages so we have fear that they are gradually migrating down.”

“What we know is that we are determined to protect our territory that is why we have come up with Amotekun. Amotekun will be right inside the forest so nobody will have the opportunity of moving.”

Meanwhile, a month ago, Ekiti State government has started receiving applications from indigenes of the state for recruitment into the Amotekun security outfit.