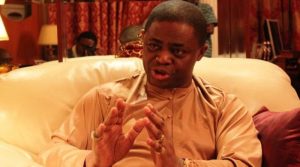 Former Minister of Aviation Femi Fani-Kayode has claimed that the recognition of Victor Giadaom as the National Chairman of the APC by President Muhammadu Buhari signals the end of Bola Ahmed Tinubu politically.

A statement on Wednesday also disclosed that Buhari would be attending the virtual National Executive Council (NEC) meeting of the party, scheduled to hold in the State House on Thursday.

The statement said the position of President was informed by the fact that the law is on the side of Giadom as Acting National Chairman.

“The President has received very convincing advice on the position of the law as far as the situation in the party is concerned and has determined that the law is on the side of Victor Giadom as Acting National Chairman.

“Because will always act in accordance with the law, the President will be attending the virtual meeting Giadom called for tomorrow afternoon.

“We urge the media to stop promoting manufactured controversies and to not give any further room for mischievous interpretations of the law on this matter.

“In addition to the President, the Giadom meeting will, hopefully, be attended by our Governors and the leaders of the National Assembly”, the statement said

Reacting in a post on his Twitter page, Fani-Kayode stated that Bola Tinubu has been thrown under the bus and retired from politics.

“First Oshiomole is kicked out by the Court of Appeal. Then his preferred replacement, Ajimobi, falls into a coma. Then his arch-rival, Giadom, is recognized by Buhari as Nat. Chairman. Conclusion: it is over for Tinubu. He has been thrown under the bus & retired from politics!” Fani-Kayode wrote.