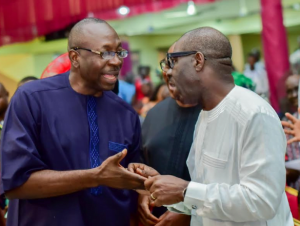 Pastor Osagie Ize-Iyamu, a governorship aspirant on the platform of the All Progressives Congress (APC) in Edo, has claimed that members of the party are happy after the exist of Governor Godwin Obaseki.

Naija News recalls that the APC had disqualified Obaseki from the governorship primary over an alleged defective certificate, which resulted in the Edo governor quitting the APC.

He was received by the leadership of the party led by the state Chairman of the PDP, Hon Tony Aziegbemi ahead of the Edo 2020 election slated for September.

In an interview with The Sun, Ize-Iyamu who described Obaseki as a bad apple accused the governor of trying to impose himself as the candidate of APC before he was disqualified.

He said: “He (Obaseki) has now left the party, following his rightful disqualification. Many party members heaved a sigh of relief when he left and currently, we are closing ranks and unifying the party for the election,” he said.

“Should my party elect me at the primaries on June 22, all the issues you speak of will be resolved in no time because really, they are all political. As aforementioned, we are already reaching out to everyone involved now that the bad apple has voluntarily taken itself out of the bag.”

Ize-Iyamu, a former guber candidate of the PDP, expressed confidence in defeating Obaseki in a free and fair election.

He accused the Edo State Governor of restricting membership of the APC to only to those who shared his view and making his personal wishes the law.

“Whether in the APC or any other platform, as long as the contest will be determined by Edo people, I am confident of victory against him. If you drive around the state today and feel the pulse of the people, you will understand why I am that confident,” Ize-Iyamu said.

“The verdict is out on Obaseki’s term as governor and in summary, the people are tired of his problematic leadership, which has focused only on personal battles and needless confrontations.

“These contentions are not unusual during election campaigns and processes. Nevertheless, there is a feeling of peculiarity with that of Edo State at this time due largely to desperation of the incumbent Governor Godwin Obaseki, who was determined to impose himself on the party in ways that were undemocratic before his exit.

“You saw how he attempted all kinds of tactics, including restricting membership of the party only to those who shared his view, making his personal wishes the law, and devoting resources into brewing confusion and chaos across all levels of the party’s leadership just to have his way.”