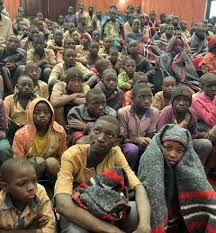 The boys and others freed by the bandits were taken to a government hotel known as NSDC Suites, opposite Government House for refreshment.

However, journalists were prevented from getting close to the boys and were not allowed to take pictures by security agencies.

Although some pictures and video clips of the students at the point of release are already in circulation.

According to government aides, the boys cannot appear in public in their unkempt condition as a result of which journalists were locked out of the hotel.

The police also came to clear journalists at the gate of the hotel, insisting that they do not want to see anyone around.

The freed students and staff members are expected to be received by Governor Abubakar Bello at the Government House in Minna.

Meanwhile, the United States of America has identified terrorist groups like Boko Haram and Al-Shabaab as a threat to Africa.

The US claimed that that the activities of the Peoples Republic of China in Africa might increase instability in the continent.

The statement is coming at the time African countries have depended on loans from China to finance their infrastructure projects.