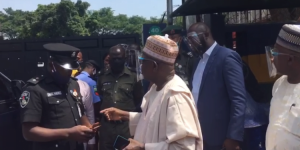 Few Hours after the National Secretariat of the All Progressive Congress was shut down, Architect Waziri Bulama, was seen at the building.

Naija News learnt Armed policemen Denied The National Secretary of the All Progressives Congress (APC)access to the building after he arrived around 10:50 am in a black Toyota Land Cruiser Sports Utility Vehicle with registration number Abuja, Abj-140DN.

A surprised Bulama asked for the leader of the team and proceeded to call the FCT Commissioner of Police.
He told reporters: “I came here this morning to resume work and met policemen who said they have instructions from above to seal the secretariat.

“I have called the commissioner of police and he said he is sending a senior Officer to see what is happening.

“The workers of the secretariat are servicing over 16 million members of this party across Nigeria. They are like civil servants.”

Naija  News had earlier reported that the National Secretariat of the ruling party was sealed by the Nigerian Police force.

Some of the party officials that have arrived at the presidential villa in Abuja for the meeting include the Acting National Chairman of the APC, Chief Victor Giadom, and the National Deputy Chairman, Lawal Shuaibu.