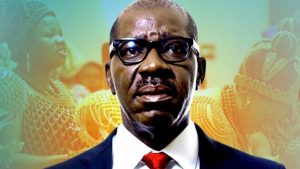 The last has not been heard of moves to make sure Godwin Obaseki is not re-elected as the Governor of Edo State in the forthcoming Edo State Governorship Election.

Obaseki and his deputy, Philip Shaibu may still have one more hurdle to navigate through as foremost lawyer and Senior Advocate of Nigeria (SAN), Chief Wole Olanipekun, is leading four other SANs in cases of certificate forgery and perjury instituted against the duo.

The All Progressives Congress (APC) and a member of the party, Mr. Edobor Williams, instituted the cases against Obaseki and Shaibu at a Federal High Court in Benin City, Edo State capital.

The APC and Williams are asking the Federal High Court to disqualify the governor and his deputy from participating in the September 19 governorship election in the state as well as prevent their party, the Peoples Democratic Party (PDP), from fielding any candidates in the election.

Obaseki and Shaibu, who are contesting the election on the platform of PDP, had contested and won the governorship election in 2016 under APC. In two separate suits filed against them, the plaintiffs want the court to stop Obaseki and Shaibu from participating in the election for allegedly lying on oath and submitting false documents to INEC to aid their qualifications in the forthcoming election. According to them, the alleged offences of the defendants run contrary to the provisions of the Electoral Act 2010, as amended, and the punishment is automatic disqualification.

The plaintiffs are also asking the court to bar the PDP from participating or representing itself in the September 19 governorship election for sponsoring ineligible candidates.

In the first suit marked FHC/B/CS/74/2020, which has Obaseki, PDP and INEC as first, second and third respondents, respectively, the plaintiffs want the court to hold that Obaseki lied on oath in his INEC Form CF 001 submitted in aid of his qualification.

In the other suit marked FHC/B/CS/75/2020, which has Shaibu, PDP and INEC as first, second and third respondents, respectively, the plaintiffs, apart from accusing Shaibu of also parading false academic documents, want him disqualified for presenting forged tax clearance certificate to INEC in 2006 in aid of his qualification for the 2007 House of Assembly election in Edo State in 2007.

The plaintiffs claimed discrepancies and alleged forgery in Shaibu’s WAEC result, adding that Shaibu’s claim that he obtained a Master of Business Administration (MBA) from the University of Benin in 2012 was false.

Naija News reports that the list of the governorship candidates published on INEC website and at the 19 local government areas of the stat, shows that the incumbent governor, Godwin Obaseki and candidate of the Peoples Democratic Party (PDP) will slug it out with Pastor Osagie Ize-Iyamu of the All Progressives Congress (APC) and 12 other candidates.

This online news platform recalls that the electoral umpire had set July 13 as the deadline for withdrawal and substitution of candidates for Edo 2020 election, however, only three parties – the Action Alliance (AA), Labour Party (LP) and African Democratic Congress (ADC) substituted their candidates earlier nominated for the poll before the expiration date.

In a statement Saturday, INEC National Commissioner and Chairman, Information and Voter Education Committee, Festus Okoye, stated that political parties can no longer withdraw or substitute any of the nominated candidates.