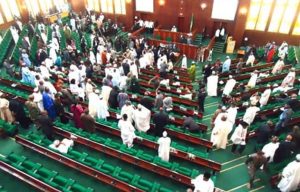 The suspension of the Management of the Nigeria Social insurance Trust Fund (NSITF) by the Minister of Labour and Employment, Senator Chris Ngige, has been faulted by the House of Representatives.

Naija News reports that the House of Representatives faulted the suspension of the Management of NSITF during Tuesday plenary,  describing the move by the Labour Minister as “draconian and against presidential directives”

The House of Representatives while adopting a motion of urgent public importance sponsored by Rep. Leke Abejide, resolved to investigate the matter with a view to ensuring that justice is done.

Abejide stressed that Ngige lacked the power to suspend the management of the agency since there was a board which never met to take any decision on the fate of the management, stressing that if the board had met, only the Secretary to the Government of the Federation has the power to issue such letter.

Also giving his take on the rift between Ngige and NSITF, James Faleke said the suspension of the management was to allow the Labour Minister have access to the budget of the agency in which he inserted about N2 billion projects and single-handedly got his wife who works in the office of the Head of Service to sign a letter granting him permission to hire Insurance brokers for the fund.

On the other hand, another rep member, Sada Soli said from the outcome of his investigation, he can conveniently conclude that the present Chairman of the NSITF board is a crony of the Minister.

Soli, whose investigative report on the NSITF is yet to be considered by the House, said the Labour Minister refused to inaugurate Comrade Frank Kokori as Chairman of the board even after his appointment by the President because of his realisation that Kokori will not allow corrupt practices in the agency.