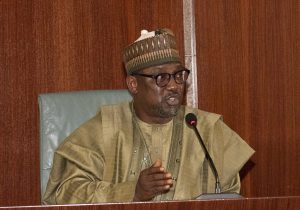 Niger State Governor, Abubakar Bello, on Friday, said he would not resign from office following the abduction of students and staff of Government Science College, Kagara.

Bello stated this during a press conference while reacting to the call by the Nigeria Youth Movement to resign within 21 days.

Recall that the Nigeria Youth Movement in a statement released on Thursday through its Co-ordinator in the state, Yusuf Yakatun, charged the Governor to resign

Yakatun said the group asked the governor to resign over his failure to protect lives and properties in the state, adding that residents can longer subscribe to Bello’s maladministration and futile excuses.

He added that the group issued a 21 days ultimatum to the governor to resign or bring back the travellers kidnapped in the state on Sunday and students abducted on Wednesday.

The statement reads, “We cannot pretend to be happy with the situation and the style of leadership in Niger State. It’s very unfortunate that a promising year like 2021 has been cut short for many families through your actions: incompetence, unjust leadership, unemployment and insecurity.”

“We have watched a short video clip of NSTA travellers abducted with utter dismay and disillusionment yesterday, sadly, and we also received the shocking news of killings and kidnapping of GOVERNMENT SCIENCE COLLEGE KAGARA Students.”

“However, we can not longer subscribe to your maladministration and futile excuses or even tolerate the callous attitude of your leadership.”

“We have issued out a 21 days ultimatum to the Executive Governor of Niger State to resign or bring back the abducted NSTA and G.C.K. School children/or face a mass protest in Niger State.”

Governor Bello, however, on Friday said, “I am not considering resign, this is the first time students will be abducted in the state”.