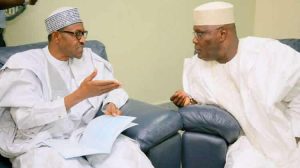 Former Vice President Atiku Abubakar has told the federal government of Nigeria led by President Muhammadu Buhari to take decisive actions against criminals in the land.

Atiku spoke in a personally signed statement on Wednesday where he reacted to the abduction of some students and staff of Government Science College, Kagara, Niger State.

The former Vice President in his reaction warned that government has to stop rewarding crime by paying ransom to the kidnappers but has to unleash the laws of the country on them to serve as a deterrent to others.

He urged the government to be proactive rather than reactive on security issues as well.

Atiku thereafter prayed for the quick and safe return of the students and staff of the government secondary school abducted on Wednesday.

The full statement reads: “I condemn the abduction of students and staff of Government Science College, Kagara, Niger State. The reported death of one of the students in the process of escape, is heartbreaking. The thoughts of my family and I are with the parents and the authorities of the institution.

The spate of insecurity in Nigeria is now beyond alarming. It has gotten to crisis levels, especially when it involves children and other minors.

Now is not the time for fingers to point in blame. Our nation needs solutions. And we have now seen that paying ransoms, and allowing criminals to profit from their criminality is not a solution.

When you reward crimes, the end result is more crime.

The only long term solution to the insecurity challenge Nigeria is facing is to end the reign of impunity. The Federal Government must enforce the laws of the Federal Republic of Nigeria against abductions and kidnappings, by apprehending the criminals, trying them and making an example of those convicted, to serve as a deterrent to others.

Also, we must be proactive. We cannot wait for these abductions to happen and then go into reactive mode.

I, therefore, call on the Federal Government to declare all secondary and primary schools in the affected states and zones, as Federal Protected Zones, and post armed military personnel at all schools for 24/7 protection.

If it is not feasible to have armed military guards in all schools, then each state in the should as a matter of urgency replicate the Civilian Joint Task Force idea, that has worked so well in Borno, and deploy them to each school, along with men of the Nigeria Security and Civil Defence Corps.

What we must not do is do nothing. History may forgive us for making wrong decisions, but we will never be forgiven if we carry on business as usual.

I pray that the Kagara staff and students are rescued, and for peace to return to Nigeria.”

Reacting to the latest abduction of students on Wednesday while contributing to a debate on a motion sponsored by Senator Sani Musa, Enagi noted that insecurity has been discussed by lawmakers on many occasions but instead of things getting better, they are getting worse.