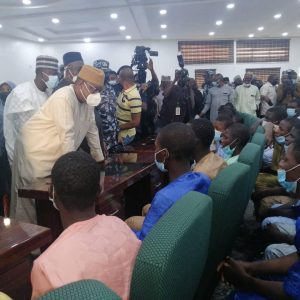 One among hundreds of students of the Government Science College in Kagara, Niger state who were kidnapped a few days ago by armed bandits has revealed what she was told by their abductors.

Conversing with reporters a few moments after regaining freedom from the bandits camp, one of the girls who gave her names as Hauwa Abdusalam, said one of the kidnappers told her the government failed to fulfil their campaign promises to them and that was why they go into banditry.

Abdulsalam described the bandits as fearless and heartless, noting that the head of the bandits, Kachalla Ali had threatened and swore to start killing the men among them before the women should the government failed to meet their demands at the end of a deadline they gave.

The girls explained further that the bandits lamented on the government’s neglect, accusing them of promising them something during the election.

Abdulsalam said the bandits claimed the government had promised them shelter, good hospitals and salary payment but reneged when they got into power. According to the girl, her family had the highest number of kidnap victims.

She, however, thanked God for sparing her life and reuniting her with her loved ones.