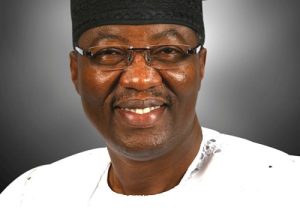 Gbenga Daniel, the former Governor of Ogun State, on Tuesday disclosed that former Lawmaker, Buruji Kashamu, had plans to transfer his political structure to him few days before his death.

Recall that the Governorship candidate of the Peoples Democratic Party in 2019 election died from coronavirus complications on Saturday in Lagos.

Daniel during his visit to the family of the deceased at Ijebu-Igbo noted that Kashumu had plans to handover his political structure to him.

The former Governor in a statement released through his media aide, Steve Oliyide, noted that Kashamu had sent emissary to him, while on sickbed, to discuss the handing over.

The former governor said he played down political discussion during the visit, rather he asked the representatives to go and pray for his survival.

Daniel was said to have spoken against the backdrop of an earlier statement by Dr Remi Bakare who spoke on behalf of the Buruji Kasamu’s political structure.

Bakare, while welcoming Daniel and his entourage, said that “it was the wish of the late Senator to have his structure handed over to OGD.”

In his response, OGD said: “It was true that Buruji sent a delegation to me last Wednesday 4th August, 2020, who came to discuss with me about his wish that I should provide further leadership for the political structure which he built and has nurtured over the years.”

“When the representatives, which include his lawyer, came, I discouraged political discussion and pleaded with them to all go and pray for his survival.”

“Unfortunately, he passed on few days after.”

While commiserating with the family, Daniel said: “I’m not here to play politics but to commiserate with you the family.”

“God will continue to uphold you because, while alive, Buruji has helped a lot of people.”

“And there is no better testimony to this than the crowd which came out en-masse in spite of the pandemic challenges; people still came out in large numbers to bid him farewell.”

“He was somebody you should be proud of because he did his utmost best to help humanity.”

The son of the deceased, Kabiru Kasamu, while reacting to the former Governor’s visit said he is happy that the differences between Daniel and his father was resolved before his death.

He said he looks forward to the continuation of such relationship between the two families.