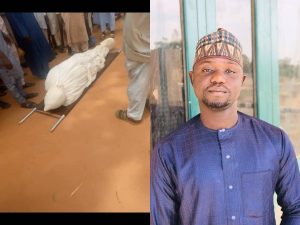 The management of Kebbi State University of Science and Technology, (KSUSTA) Aliero, has asked all students to vacate the school premises with immediate effect.

Naija News reported earlier that a 400-level biochemistry student of the varsity, Sharif Sale-Kanya, was lynched by a mob over alleged theft.

It was reported that the deceased purchased a handset in Aliero town on Saturday, February 27 and paid for the phone via mobile transfer. Kanya was said to have switched off the phone after purchase and went into the examination hall.

However, moments later after he was through with the exam, he switched on the handset and just then he realised that the money he transferred for the payment of the handset had been reversed due to network failure.

Naija News learnt that Kanya journeyed back to Aliero town to pay for the handset in cash. Unfortunately upon reaching the place where he bought the phone, the seller raised alarm and a mob of youths descended on him Kanya shouting barawo (thief) and he was beaten into a coma.

He was said to have died at the General Hospital where he was rushed to for medical attention.

Reacting to the sad development in a statement made available to newsmen earlier, the Registrar of the university, Musa Labbo, directed all students to leave the school premises immediately.

Naija News understands that the deceased had only a week left to become a graduate on the institution before he was murdered over N3500 only.

On his part, while confirming the incident, the spokesperson of the university, Hussaini Adamu Zuru, said the murder angered the students of the institution who went on a rampage, blocking the highway leading into Sokoto State.

Zuru explained that Kanya was murdered by the residents of Aliero Town despite his effort to sort out the matter.