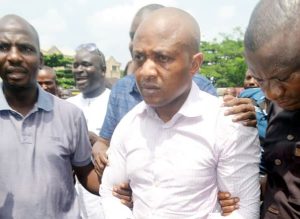 The Lagos High Court sitting in Ikeja, is expected to rule on the no-case submission made by, Chukwudumeme Onwuamadike popularly known as Evans and co-defandants.

The kidnap and murder trial will be presided over by Justice Hakeem Oshodi.

The ruling of the judge today will determine whether or not the case will continue.

However, the second defendant, Uche Amadi, did not file a no-case submission.

The defence counsels – Roger Adewole, Olanrewaju Ajanaku, M. C. Izokwu and Emmanuel Ochai are calling the on  court to dismiss the case.

The Lagos State Government through the Attorney General and Commissioner for Justice, Moyosore Onigbanjo, is opposing their demand.

At the last sitting, Oshodi ordered an Office of Public Defender counsel, E. E. Okonkwo, to take over Evans’ defence following the report that Evans could not afford a lawyer.