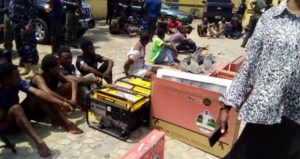 A young man identified as Godgift in Bayelsa has been reportedly killed by his girlfriend over missing money.

Ebiere Ezekiel (the girlfriend) who is said to owned a hairdressing shop reportedly engaged her boyfriend in an argument over her missing one thousand five hundred nails. Naija News understands that her approach infuriated Godgift and he slapped her.

In anger, the 28-year-old lady picked up a knife and stabbed her boyfriend who is only 21 years of age in the stomach.

Naija News understands that the disturbing incident happened at their residence in Obele, Yenagoa Local Government Area of Bayelsa State.

Ebere who was paraded by the State Commissioner for Police, Mr Mike Okoli, alongside other suspected criminals on Thursday February 18, is said to have been dating the deceased for over 12 months.

The CP added that another suspect, Iniobong Maffat was arrested for allegedly conspiring with his gang members to rob one Mr Nhene Chinedu. The suspects, according to the CP, allegedly robbed the victim of his company’s Toyota Corolla car loaded with pharmaceutical drugs worth N650, 000 along the Sani Abacha expressway in Yenagoa metropolis.

He said investigation by a team of Operation Puff Adder led to the arrest of the suspect in Uyo, Akwa Ibom State capital.

The CP said the command also arrested one Gigi Christopher, Kingsley Okulolo, Godbless Raymond and Vivian Christopher for alleged burglary and stealing at a shop in Amarata area of the state capital.