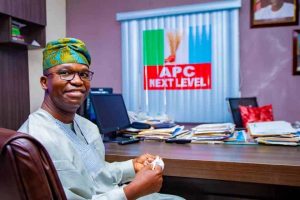 The Lagos Chapter of the All Progressives Congress has noted that the eligibility of its Lagos East by-election senatorial candidate, Tokunbo Abiru, is unquestionable.

The party spokesperson, Seye Oladejo, in a statement released on Thursday, said there is no court suit challenging Abiru.

There were reports that the APC candidate has been dragged to court case over purported double voter registration.

Oladejo in his reaction called it false and laughable.

Oladejo noted that the plaintiffs have not availed themselves copy of the Electoral Act 2010 (As amended).

“We understand their panic, fear and unease on account of the overwhelming and calamitous defeat that awaits them on the 31st of October, 2020.”

“They should do well to ask the traducers of Willie Obiano (of Anambra State) and Yahaya Bello (of Kogi State) and avail themselves of several other Court decisions in that respect,” Oladejo said.

He called on the opposition to continue to chase shadows, he added that APC is focused on its campaign

The Lagos East poll will be held on October 31.