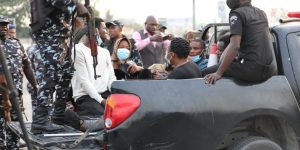 The Attorney-General and Commissioner for Justice in Lagos State, Moyosore Onigbanjo, has condemned the alleged brutalization of #OccupyLekkiTollGate protesters on Saturday.

Naija News reports that a video emerged on Saturday, showing policemen dehumanizing the protesters by stripping them half-naked while hauling abuses on them.

The protesters which included a popular Instagram comedian, Mr Macaroni, were later granted bail and released by a court.

Speaking on Sunday when he featured on Politics Today, a Channels Television programme, Onigbanjo said the state government ensured that protesters rights were not breached.

The attorney-general said the police will give an account of what happened at the tollgate on Saturday, adding that the state derives no joy in seeing people harassed.

He said: “Your right to protest only extends to where the other person’s right to his own freedom of association and movement starts.

“We condemn any act of brutality and dehumanisation on the part of the police or anybody for that matter. There are three ways to address this. Firstly, is for the commissioner of police himself to set up what is known as an orderly room trial.

“Secondly, if investigation reveals that any police officer abused their authority, and these facts are sent to the DPP’s office, and the DPP says that the policeman or woman has a case to answer, appropriate charges will be filed.

“The third leg of it, even these citizens who claimed that they were brutalised also have the option to sue the police to court for this act which they alleged.

“In Nigeria, if you are arrested on a Friday, you are probably going to end up in a police station or whatever detention till the next week, but we made sure that the court sat late on Saturday to ensure that people that were arrested were released to go home.

“But that didn’t happen, because we’re hellbent on ensuring that nobody’s right is trampled upon.”