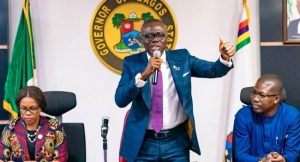 The Governor Babajide Sanwo-Olu led government of Lagos State has reportedly sealed-off some private schools in the state for violating the lockdown rules put in place to contain the COVID-19 pandemic.

Naija News learnt that ten private schools have been put under lock by the Lagos government for allegedly defying the school closure order.

The development was revealed by the Lagos State Director-General, Office of Education Quality Assurance, Mrs Abiola Seriki-Ayeni, following massive monitoring of private schools by the state Monitoring and Investigation team.

Ayeni disclosed that the team which she led had visited a large number of private schools across the state to ensure total compliance with the COVID-19 regulations to avoid further spread of the deadly disease. According to her, the team caught some schools violating the order and have since sealed them off.

She noted that the schools were caught holding lessons for their teeming students in the school premises, going against the state government’s order.

The Director-General urged parents and school owners, to ensure strict compliance with the directive of the Lagos State Government to protect the lives of the children. Also, she encourages citizens to promote the habit of washing hands with soap, wearing of masks in public places and using alcohol-based hand sanitizer.

She added, “This is a unique time in the entire world, therefore, it is only the living that learns.”

Ayeni also admonished parents to adopt the online schooling system for their children for now until normality is restored.

Meanwhile, the management of OPay, an online financial technology service provider that gained massive acceptance from citizens after its launch into the Nigerian business community has announced it is temporarily shutting down some of its activities.