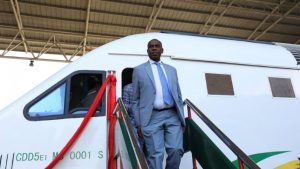 Rotimi Amaechi, the Minister of Transportation has explained that the ongoing Lagos-Ibadan rail project has provided job opportunities for about 20,000 Nigerians.

Amaechi made the disclosure as part of his defence when he appeared on Monday at the public hearing in Abuja by the House of Representatives Committee on Treaties, Protocols and Agreements who noted that local content was not observed in the course of the project.

The Minister explained that the project is in compliance with the local content law inherent in the 1.6B dollar contract agreement between Nigeria and China.

In his words, “There are over 20,000 Nigerian workers employed for the construction of the Lagos-Ibadan railway project, only 560 of the workers on that project are Chinese,” adding that “We have over 150 Nigerians being trained as Engineers in China.

He further noted that most of the materials been used for the project were locally sourced except for those that were manufactured outside Nigeria.

Meanwhile, as previously reported by Naija News, it took the intervention of the Speaker of the House, Honourable Femi Gbajabiamila to quell a rowdy session on Monday between the lawmakers and the Minister during the public hearing.

A mild altercation ensued between the Minister and the Chairman of the Committee, Nicholas Ossai from Delta state.

The Chairman of the committee questioned the former Governor of Rivers State about the alleged $33 billion loans for infrastructure.

Amaechi while responding to the question noted that his ministry is only aware of the $1.6 billion for Lagos-Ibadan. The Minister accused the committee of being political.

The Chinese has also built two training institutions for us, one at Idu and the other one is the Transportation University in Daura, Katsina state.”

“Mr. Chairman, there is no $33bn contract in the Ministry of Transportation. What we have is $1.6b awarded by this government for Lagos-Ibadan, for which the Chinese government is providing $1.2b and we are providing the remaining $400m.” Amaechi stated.

The Minister also noted that Nigerians would be the biggest loser if several loan agreements signed with China were cancelled due to the investigation being carried out by the lower chamber.

Amaechi noted that the Chinese loan can not be subjected to endless probe, adding that if the probe continues, the request would likely be declined and will be disastrous for Nigerians.