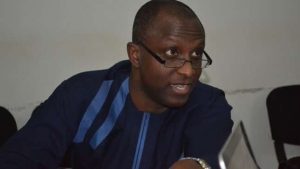 The presidential spokesman, in his statement, said the Federal Government expects more of such a verdict.

He took to his Twitter account and wrote, “We expect more of such because indeed justice is the first condition of humanity.

“We commend police authorities for earlier dismissing the convicts. Progress.”

Naija News had earlier reported that a dismissed police officer attached to the defunct Special Anti-robbery Squad, Joseph Omotosho has been sentenced to death by hanging by a High Court sitting in Benin, Edo State capital.

It was reported that four others, Adeleke Adedeji, Abena John, Oniyo Musa and Henry Shobowole, who escaped from prison during the #EndSars protest last October, had their sentences suspended.

The suspects were accused of conspiracy in the extrajudicial killing of a car dealer, Benson Obodeh, in 2015 and were found guilty on eight counts bordering on conspiracy to steal and murder.

It gathered that the dismissed police officer, withdrew N330,000 from the deceased’s account through Automated Teller Machines, having obtained the PIN from Obodeh before he was killed.