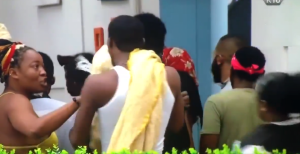 2020 Big Brother Naija reality TV housemate, Vee has expressed fears of being pregnant after she disclosed she has missed her period.

Vee made the disclosure during a chat with Neo, a fellow housemate with whom she has become an ‘item’ in the house – the two have become lovers.

Big Brother Naija reality show housemates, Brighto and Wathoni have been caught on camera doing the unimaginable under a duvet.

In a video now viral on the social network, Brighto was seen twisting his right hand somewhere below Wathoni’s under part with his face up while she cuddles him.

3.BBNaija: I Regret My Friendship With Ozo- Dorathy ‘Weeps’ (Video)

Dorathy Bachor, a female Housemate of the ongoing BBNaija Lockdown show, has lamented that she regrets her friendship with fellow housemate, Ozo.

Naija News recalls that Dorathy and Ozo were close friends when the show started. The show how strong their friendship was at the time, Ozo picked Dorathy as his Deputy Head of House when he won the BBNaija HOH

4.BBNaija: I Know You Have Feelings For Me – Erica Tells Brighto

Erica, a female Housemate of the ongoing BBNaija Lockdown show, says she is convinced Brighto, a male housemate of the reality show, has feelings for her.

Naija News recalls that Erica had said she is physically attracted to Kiddwaya who she described as her “Bestie and Special friend” during Sunday live eviction but Kidd had made it clear that he has no feelings for her.

Vee, one of the housemates remaining in the lockdown edition of the Big Brother Naija reality TV show says she’s not sure she can survive another five weeks in the house.

This is as she lamented that ‘konji’ has almost finished her and it keeps getting harder every day.Konji is a street term used to describe the urge to have sex, Naija News reports.

Prince, one of the housemates of the ongoing Big Brother Naija reality show has revealed that he would break the relationship between fellow housemates, Erica and Kiddwaya’s relationship.

Five Housemates in the Big Brother Naija Housemate, lockdown edition have won N400,000 each during the Hawaii challenge in the reality TV show.

Laycon, Nengi, Prince, Wathoni and Praise were members of Team Hawaii Carrot, which won the challenge. The five Housemates won N2million in the reality show on Day 31 of the show.

8.BBNaija: ‘Do You Want It Big’ – Said Kiddwaya As He Fondles Erica’s Breast [Video]

Big Brother Naija Lockdown housemates, Kiddwaya and Erica has been caught on camera having a sexual play.

In a now-viral video on social media, Kiddwaya was spotted massaging Erica’s breast on national tv, asking if she wants some boobs enlargement considering her breast size

9. BBNaija 2020: ‘My Net-Worth, Bank Account Can Not Be Compare To Other Housemates’ – Kiddwaya Boasts

Big Brother Naija, BBNaija 2020 housemate, Kiddwaya has bragged about his family fortune, said he cannot be compared with any contestant of the Nigeria’s biggest reality TV show.

Naija News recalls that the billionaire son had in July disclosed that he paid $8000 to board a private jet from Abuja to Lagos just to meet up for the show.