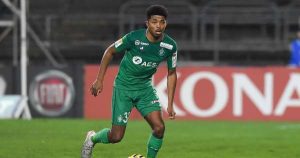 Leicester City have completed the signing of teenage defender Wesley Fofana from Saint-Etienne in a record-breaking deal.

The French side declared earlier in the week that the move would be the biggest sale in their history, with reports that Leicester are paying in the region of £30 million ($39m) for Marseille-born Fofana.

Now the deal taking the 19-year-old to England has been sealed, Leicester announced on Friday.

Fofana told Leicester’s official website: “I’m very happy to be here. I’ve watched Leicester City closely since they won the title and they’re a top club in the Premier League.

“I know I will learn a lot from the players and the manager here, which is one of the main reasons I came. I can’t wait to get started.”

Fofana was described by Saint-Etienne as “one of the greatest French talents of his generation” on Tuesday, when they revealed the centre-back was heading to Leicester.