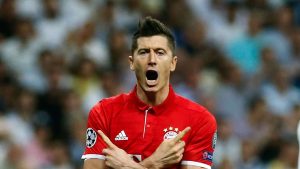 Bayern Munich continued their dominance of the German top flight by wrapping up the 2019/20 season of the football top flight in the country.

Bayern battled their way to another title with a 1-0 win over Werder Bremen.

Though there are still three games left of the current season, Bayern are 10 points clear of Borussia Dortmund who are their closest rivals, meaning they have effectively won the league this season.

Robert Lewandoski showed no sign that he is 31-years-old as the Polish striker latched onto a ball inside the penalty area and converted coolly into the far corner for his 31st goal of the season.

Naija News understands Bayern have now won their eighth consecutive Bundesliga title and overall 29 league titles since the Bundesliga was formed in 1963.

The club also remains on course for a treble as they are still in competition in the Champions League and will still take on Bayer Leverkusen in the German Cup Final.