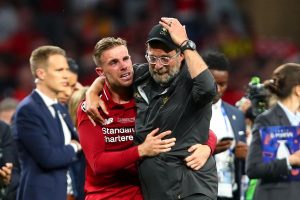 Naija News understands that the defending champions now seats in the sixth position of the EPL with just 40 points. The club had lost its last three matches in the EPL and as a result, now struggle to make it to the top four.

Liverpool’s recent poor performance has, however, stirred controversies among fans as take each take sides on whether Klopp should leave the club or remain as the head coach.

Meanwhile, the German professional football manager and a former player have led the Reds to Champions League, Super Cup, Club World Cup and Premier League titles within the time spent in Anfield.

Klopp who joined Liverpool in 2015 led the Reds to again lift the league championship, a record earned after 30 years.

However, Klopp after learning about the reports that he was sacked and replaced with Jordan Brian Henderson, the Red’s skipper said: “Did I get the sack or did I leave by myself? Neither. I don’t need a break!”

Klopp on rumours: "Did I get the sack or did I leave by myself? Neither. I don't need a break!" #awlfc [lfc]

Naija News reports that Liverpool will face RB Leipzig on Tuesday, February 16 in the round six (6) of the UEFA Champions League.