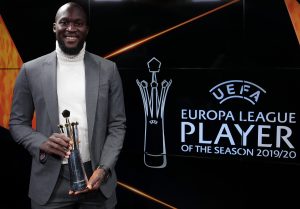 Inter Milan striker, Romelu Lukaku has been crowned as the 2019/20 Europa League Best Player of the Season.

This was announced on Friday at the award event held at the UEFA headquarters in Nyon, Switzerland.

The 27-year-old Belgium international scooped the award ahead of Manchester United’s Bruno Fernandes, and Sevilla’s Ever Banega.

Lukaku had an impressive run in the 2019/20 Europa League season, scoring seven goals and providing two assists. His team however missed the trophy after losing out to Sevilla in the final game of the tournament.

Lukaku ended 2019/20 with 34 goals in all competitions for Inter Milan.