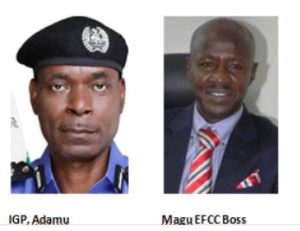 Mohammed Adamu, the Inspector-General of Police (IG), has ordered the total withdrawal of all police operatives attached to the Economic and Financial Crimes Commission (EFCC).

IGP Adamu’s order was contained in a signal to the Assistant Inspector General (AIG), Police Mobile Force (PMF), PMF Squadrons one to 79, Force Secretary and Commissioners of Police of all the state commands and the Federal Capital Territory (FCT).

Naija News reports that the police boss also directed that the exact number withdrawn be replaced with new operatives.

IGP Adamu also restricted non-staff of the EFCC from gaining access into the premises of the antigraft agency.

Meanwhile, PresidentMuhammadu Buhari has approved the suspension of Ibrahim Magu as the acting chairman of the EFCC.

This was made known in a statement on Friday by Umar Jibrilu Gwandu, media aide to Abubakar Malami, the attorney-general of the federation.

The statement reads in part: “President Muhammadu Buhari has approved the immediate suspension of Ibrahim Magu as Ag. Chairman EFCC in order to allow for unhindered inquiry by the Presidential Investigation Panel under the Tribunals of Inquiry Act and other relevant laws.

“President Muhammadu Buhari has also approved that the EFCC Director of Operations, Mohammed Umar, should take charge and oversee the activities of the Commission pending the conclusion of the ongoing investigation and further directives in that regards.”