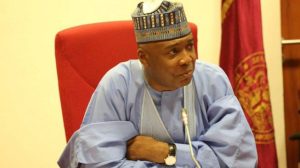 It will be recalled as previously reported by Naija News that Justice Rilwan Aikawa of the Federal High Court sitting in Lagos State, ordered the EFCC to return the properties belonging to the former Senate President.

Justice Aikawa by his ruling, reversed the earlier order which mandated Saraki to forfeit two houses in Ilorin to the Federal Government.

The judge said this on Thursday while delivering judgment on an application by EFCC seeking the permanent forfeiture of the houses after the anti-graft agency in December last year secured a court order for the interim forfeiture of the houses Plots No. 10 and No. 11 Abdulkadir Road, GRA, Ilorin, Kwara State upon telling the court that they were acquired with proceeds of unlawful activities allegedly perpetrated by Saraki while he was Kwara State Governor between 2003 and 2011.

However, Justice Aikawa ruled that EFCC did not present sufficient basis and he could not “find his way through” to grant the permanent forfeiture order.

Reacting to the development, Saraki in a personally signed statement on Thursday night, said the court order which dismissed EFCC’s application for the forfeiture of the houses, clearly shows that the anti-graft agency had been fighting a wrong battle all along.

“Today, as always, I thank Almighty Allah as I welcome the judgement of the Federal High Court, Lagos, by The Honorable Justice Rilwan M. Aikawa in which the court dismissed in its totality the application by the Economic and Financial Crimes Commission (EFCC) for forfeiture order on my home at Ilorin, Kwara State.”

“I am particularly happy that the court specifically ruled that there was no evidence that the property was built with any illicit or stolen funds from Kwara State Government or any other institution or quarter, whatsoever,” the statement noted.

Saraki who described the five years during which the trial lasted as a challenging time for himself and his family said the court order reveals the EFCC under Ibrahim Magu was turned into a personal vendetta tool.

“The last five years have been very challenging for me and my family. I have endured and defeated one false allegation and malicious litigation after another, in an ill-motivated persecution, intimidation and harassment, through which some vested interests sought to damage my name and label me with charges of corruption but with the grace of Allah, I have always been victorious. I thank God for the outcome of this case which is the fifth victory in cases in which the EFCC was either the main investigating agency or the plaintiff.”

“It is obvious that the EFCC leadership under its erstwhile acting chair, Mr. Ibrahim Mustapha Magu decided to take the issue of his non-confirmation by the 8th Senate which I led, personally.”

While justifying the decision of the 8th Senate to deny Magu’s confirmation, Saraki noted that the now-suspended acting EFCC Chairman embarked on the trial to get back at him.

“However, I know that the Senate under my leadership only followed the due and normal procedure during the confirmation process and we never executed any personal agenda against Magu. The records of the Senate during the period is there for the perusal of all Nigerians interested in the truth.”

“I hope that with the outcome of today’s case, the EFCC should learn that a serious issue like the fight against corruption should not be reduced to a forum-shopping means to execute personal vendetta or prosecute parochial agenda.”

“Fighting corruption and combating economic crime requires stakeholders to eschew coercion while employing upright diligence, due process, fairness, equity, and broad mindedness in dealing with all cases and persons.”

“The deployment of a state institution to fight personal and partisan battle, particularly with the use of the mass and social media as championed by the EFCC was aimed at inflicting damages to my name, reputation and elective public service record, through a targeted misinformation and disinformation campaign of calumny, also directed at intimidating the judiciary. It was directed at giving the wrong impression about me.”

“As I record yet another vindication by the competent court of law, God’s willing, my focus will now shift to more serious issues.”

“It is the grace of Allah and the support of my family that saw me through these past trying years. My family members have withstood with courage, candor, resilience, and grace the war of attrition which was also directed at them. I thank all of them.”

“Let me also express appreciation to my supporters across the country, particularly those in Kwara State, my colleagues in the Eighth Senate, my friends, associates and lawyers for standing by me all through the period of the travails.”

Saraki however noted that he holds no personal grudge against anyone, but called for the institutions in Nigeria to be strengthened against becoming mere tools to execute the personal interests of some people.

“It is important to put it on record that I hold no grudge against any individual for their roles in my trials. My experience in the last five years has only strengthen my faith in Almighty Allah, the Nigerian nation and her judiciary which has always risen above the din to give justice at all times and in all situation.”

“Definitely, I remain unflinching in my belief that we need to build a functional society which creates the right atmosphere for all to aspire to be whatever positive they desire.”

“At this point, let me strongly express my support for the anti-corruption war and the institutions created to prosecute this war. My antecedents show that I have always sponsored and backed initiatives in this direction. I was part of the team that initiated the enactment of the Fiscal Responsibility Act and Public Procurement Act under the Obasanjo administration.”

“As Governor of Kwara State, my government was the first state to introduce the Price Intelligence Unit and was also the first state to submit our financial process for rating by Fitch, the global rating agency. As a member of the 7th Senate, I sponsored the motion which exposed the monumental fraud in the fuel subsidy payment while the 8th Senate under my leadership passed five different bills aimed at strengthening the fight against corruption, particularly the law that created the National Financial Intelligence Agency (NFIA).”

“With today’s decision of the Court, it is my expectation that the EFCC which has played significant roles in the various court cases against me from the CCT to Supreme Court and back at the Federal High Court, with the consequent media trial and malicious campaigns, will now leave me alone to live my life, and enjoy my unfettered rights to freedom of thought, expression, association, occupation and dignity, as a private citizen and focus on serious issues of national development.”