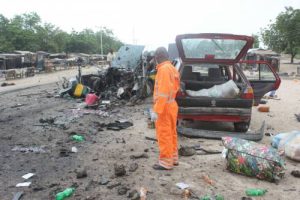 Nine boys were killed while playing football at Gwange near the house of the late General Mamman Shuwa when Boko Haram fighters launched multiple attacks on Maiduguri, the Borno State capital.

Naija News reports that the attack led to the death of ten persons, while 47 people have sustained injuries from the incident.

It was gathered that the figure was confirmed to the state Governor, Babagana Zulum by the hospital officials where the affected persons were taken to.

There were reports that the incident started at about 7:00 pm when multiple sources reported gunshots and explosions near the Gomari area of the state.

The sources claimed that the explosions were also heard in the Mairi area, a student’s village near the University of Maiduguri.

“The explosive fell a few metres from our house. All the people that sustained injuries have been rushed to the UMTH for treatment,” a Maiduguri based journalists, Ali Chiroma told DailyTrust.

Adults including men and women as well as children were among the fatalities, with sources saying some of the victims have lost their limbs.

The areas worst affected are Kalere, behind the University of Maiduguri Teaching Hospital (UMTH); Gwange; Adam Kolo, not far from the Shehu of Borno’s Palace and adjoining densely populated areas.

Residents and security sources said following the first set of bombs launched at densely populated areas of the city, the terrorists made attempts to use the opportunity to go into the town but were repelled.

It was the first major and audacious assault on Maiduguri in years, heightening fears among residents that the terrorists might be lurking around, observers said.

A top security source said the terrorists deployed mortar bombs and rocket launchers from the outskirt of Maiduguri and targeted the civilian population, killing many and inflicting serious injuries in others.

All efforts to reach out to the military in Maiduguri; NEMA and SEMA, for official comments were not successful.

At the UMTH along Bama Road, humanitarian workers, family of victims and acquaintances rushed their injured loved ones for treatment.

“We would most likely stabilise some of the injured but the case of some of them is bad,” a doctor said, asking for anonymity.

“Some of the victims would require surgery and others would need blood transfusion. There are some who lost their limbs…” he said.

Another source at the hospital confirmed that they have 9 dead bodies brought to the facility following the multiple blasts in Maiduguri.

“It is an overwhelming situation; we have many injured persons currently receiving treatment now,” he said.