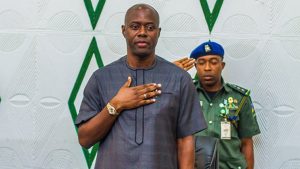 The Baale of Shasha community in the Akinyele Local Government Area of Ibadan, the Oyo State capital, Akinade Ajani has accused eight persons of been mischief-makers in the community.

It was learnt that the disturbing event led to the destruction of shops and properties by hoodlums who took advantage of the clash. It was reported that residents were forced to flee the troubled area around 5:30 pm last Friday.

Following the clash, Governor Makinde shut down the market and declared a 24-hour curfew in the community.

Makinde also led some northern governors to the leaders of the Yoruba and Hausa communities in the market on Tuesday.

Speaking to The Punch on Tuesday, Ajani said peace and calm have started returning to the once crisis-ridden community.

He said, “There can be smooth co-existence once again between the Yoruba and Hausa communities in Shasha. There are just about eight persons causing the commotion. Once the eight persons leave this place, other residents will live harmoniously.”

The Baale, who didn’t disclose the names of the fingered persons, insisted that “those causing commotion in Shasha must leave the community, whether Hausa or Yoruba indigenes”.

“These eight persons pursue their selfish interests. I told the governors all these when they visited today and they assured me that they will work on it,” he added.