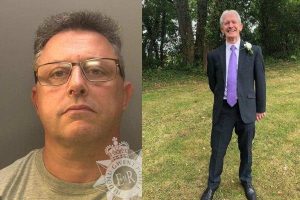 55-year-old Stephen Gallagher has been sentenced to life imprisonment after for stabbing his father, 76-year-old Thomas, to death during a heated argument over their broadband speed connection.

Gallagher who reported the case to the United state police after committing the gruesome murder said that his father irritates him and ignores during an argument.

Naija News learnt that Gallagher grabbed the phone away from his father Thomas, smashed the phone on the floor, and stabbed him more than a dozen times. Gallagher then called 999 and confessed what had taken place to the phone operator, and went into “some detail”, prosecutor Mark Wyeth told the court.

‘I could see he was in pain and he said ‘Steve’ – I wanted to finish him off stabbed him again and told him to die.’

‘It is beyond comprehension that what started as an argument over such a trivial matter as the internet provider at their home could result in this tragic murder.‘There was an argument between father and son. What began as a trivial argument led to the defendant go to his bedroom and retrieving the knife.’

Sentencing him at Swansea Crown Court, the judge handed him a life sentence with a minimum of 13 years and four months and said he would not be eligible to be considered for release until 2033.

“As you know, you may, in fact, never be released,” he added.