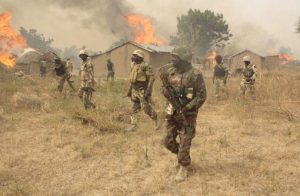 Troops of the Nigerian Military and terrorists fighters of the Islamic State of West Africa Province (ISWAP) recently engaged in a fierce gun battle.

According to information made available to Naija News, the two camps engaged in the gun battle in Marte town of Borno State.

Furthermore, lives were said to have been lost from both sides but the exact number of those killed could not be ascertained yet as at press time.

It was, however, gathered according to a press statement made available on Monday evening by PR Nigeria on the matter that the ISWAP fighters, came into Marte town in a convoy of motorcycles and gun trucks between Sunday evening and Monday morning.

The terrorists attempted to kidnap ‘innocent’ residents from their communities and the Internally Displaced Persons (IDPs) camps but met stiff resistance from the military.

This led to the fierce gun battle between the military troops deployed along communities, and major routes in the insurgency-ravaged town, and the invading terrorists.

An intelligence source, who will not disclose his name, told PRNigeria on the rising cases of frequent attacks in the area that, “terrorists fleeing areas and zones where the ground and air troops have intensified their onslaughts in the North East, may have been the ones invading other hitherto peaceful communities and calm towns such as Marte, to abduct and maim innocent lives.”

Reacting to the clash that happened at Shasha market in Ibadan, on Friday, Moghalu said the failure of the government to curb insecurity is forcing Nigerians to resort to self-help.

In a statement on Monday, Moghalu condemned the killing of “innocent” northerners in Oyo state, adding that the tension between herders and farmers in the south-west could lead to reprisal attacks.

He called on President Buhari to act decisively and end kidnapping and banditry, saying no one should be above the law.