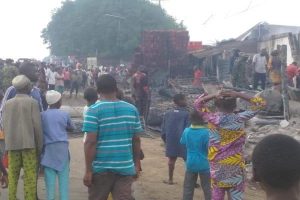 Many shops and houses have been  destroyed after a tanker loaded with Premium Motor Spirit (PMS) exploded in flames after crashing with a trailer in Lambata town in Gurara Local Government Area of Niger State.

As at this morning, the details of the losses are yet to be ascertained as victims and those affected were seen crying uncontrollably.
Some of the affected persons are still counting their losses as the Federal Road Service Corps (FRSC) tries to control the traffic and the Fire Service are working to put off fire in some places that are still burning.

An eyewitness’ report has it that both vehicles collided at about 11pm on Sunday, thereby leading to a spill of the petroleum products to a nearby coal fire causing the tanker to explode.

New Telegraph learnt that several houses, shops and cars were burn before the Fire Service men from Suleja got to the scene to put the fire under control.
One of the affected shop owners, Maryam Tukum stated that: “Thanks be to Allah, we were all awake when we heard the explosion. Quickly we all ran away and as we were screaming people were also running for their lives. If there are deaths, then it must be the drivers and their conductors who usually sleep in the tankers.”
She added that: “Some drivers also lodged in motels and chalets, but I don’t know if they were affected too. But thank God for sparing our lives”.
All attempts to speak to speak with tanker drivers failed as none of them was willing to speak.
Here are some Pictures of the explosion aftermath 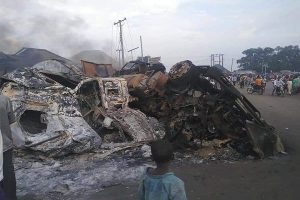 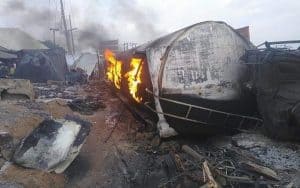 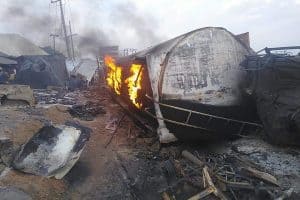 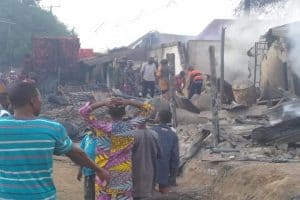 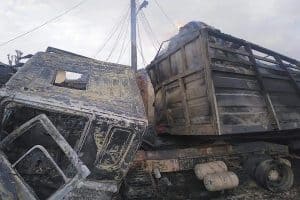