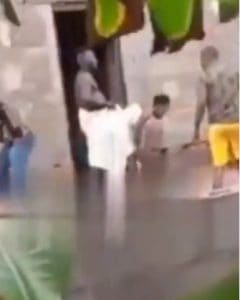 A video of a married woman glue to her lover while having sex has been spotted on the internet.

Eyewitnesses at the scene of the incident linked it to magun and it was further reported that the incident occurred in Ogun State.

The lovers were spotted in the video crying and begging to be released from the charm.

Magun which in Yoruba language means “Do not climb”, is a dreadful and deadly charm usually employed by offended husbands to punish adulterous men having illicit sexual affairs with their wives.

Married woman glued to lover while having s3x in Ogun state. pic.twitter.com/d4R7NhaBkb