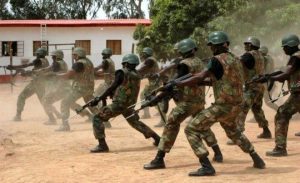 A soldier of the Nigerian Army, Corporal Aliyu Yakubu has been dismissed from service and also sentenced to five years in prison for sexually assaulting a 13-year-old girl.

Yakubu was found guilty of the offence on Wednesday by the seven Division of General Court Martial of Operation Lafiya Dole.

The corporal was said to have committed the crime on July 1, 2018 while he was serving in 202 Battalion in Bama Local Government Area of Borno State.

Naija News gathered the soldier forcefully hit the young girl’s head against the wall until she lost consciousness before he then forcefully had carnal knowledge of her in an uncompleted building.

He was found guilty of both charges based on the pieces of evidence before the military court, with his action punishable under the laws of the armed forces.

This online medium, however, reports that the judgement is subject to confirmation by the military high command.

Meanwhile, the Nigerian Army has expressed its full support for the efforts of Borno State Governor, Professor Babagana Umara Zulum to repatriate the state’s refugees to their hometowns.

The statement came from the office of the Acting Director of Public Relations of the Nigerian Army Headquarters in Abuja, Col. Sagir Musa, in a press statement issued in Maiduguri on Tuesday, described the move by Governor Zulum as “right steps in the desired direction”.

Col. Musa added, “The Nigerian Army is fully in support of the ongoing efforts by the Governor of Borno State, Prof Babagana Umara Zulum, to relocate our fellow countrymen and women who are internally displaced in the state back to their ancestral homes.

“Indeed the governor’s efforts are commendable and the right steps in the desired direction.”