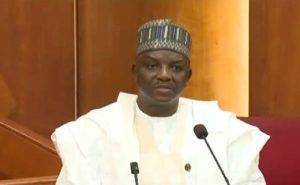 Nigerians on the microblogging site, Twitter, has condemned the Minister of Power, Engr. Sale Mamman for praising President Muhammadu Buhari on efforts put in place to fixed and transformed the country’s power sector.

According to Mamman in a post on his verified Twitter account on Wednesday morning, September 30, Nigerians will one day look with pride and appreciate what the Buhari’s government has done to fix the nations’ power sector.

He tweeted; “In the near future, we Nigerians will be able to look back with pride and say the administration of President @MBuhari fixed & transformed the Power sector.

“We are on the right track!”

In the near future, we Nigerians will be able to look back with pride and say the administration of President @MBuhari fixed & transformed the Power sector.
We are on the right track!

However, some Nigerians who are unsatisfied with the availability of power in their respective states and the country at large faults the minister assertion.

Reacting to Mamman’s claim on the bird app, Ahmad Shehu, an Adamawa State professor with the user name [@ahmadpullo], told the minister to stop the talking and do the work.

He wrote; “Stop the talking and do the work, Mr Minister. You’re not an ordinary citizen and shouldn’t, therefore, spend the data taxpayers bought for you in ranting and unrealistic praise-singing.”

Responding to Shehu’s tweet, the minister again stated that the incumbent government has recorded significant progress in the sector and that Nigerians should understand that.

He tweeted; “Thank you Dr. Ahmad, a simple tweet does not mean the work we are doing is on hold. We have recorded significant progress and we have also used this medium to keep Nigerians informed. I wish you the very best in your endeavours. Good Morning and a bit of civility does not hurt.”

The prof, however, refused to fall for the claim as he as went ahead to berate other citizens on the social app who troll at him for condemning the present administration over poor development in the power sector.

“It does really matter to us who pay through our noses and still pass our nights and days in utter darkness. We have read more tweets of promises and updates here than we have light. Now we pay Hundred points symbol more for darkness, I don’t think 1 cn b more civil dn we already are.” Shehu reiterated.

He added, “You see all of you in this thread has made me feel better. Really better. Especially for those who think that my Ph.D. should make me get used to the conditions of life you guys are advocating for here. Some of u think that I am rude bcos they r conditioned to accept everything.”