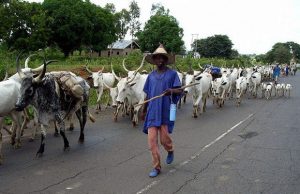 The Miyetti Allah Cattle Breeders Association (MACBAN) says it is not aware of any of its members being prosecuted for violent crimes.

The group said this in its reaction to the statement by Presidential spokesperson, Garba Shehu who revealed on Monday that the federal government is prosecuting many criminal herdsmen across the nation.

Speaking during an interview on Channels TV, the media aide also urged the police to release the names of all those criminal herders being prosecuted particularly in Benue State.

“The fact now is having spoken against it, it follows that all security agencies must take their line of action from the president’s remark and do that which is necessary which is to stop the escalation of the violent attacks being witnessed in some parts of the country and ensure that it does not go beyond where it has been recorded.”

“I hope the headquarters of the police will take responsibility and publish the full list of Fulani herders who are undergoing trials in various states, particularly in Benue State.

However, MACBAN Publicity Secretary in Kaduna State, Malam Ibrahim Bayero, asked the presidency or the federal government to release the list of its members that are being tried.

Bayero stressed that none of its active members was under any trial for any known or suspected crimes.

He said: “We are not aware of any of our active members being tried for any form of criminal activity as claimed by the government.

“That is not even our concern for now. Our main challenge at the moment is how to cope with the quit notice issued our members by South West governors who have now relocated to Kaduna and other parts of the north.

“We are traumatised for now and we need urgent help from those who can assist us.”