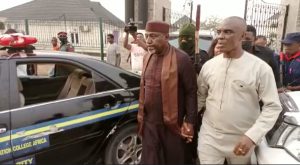 Okorocha was arrested for unsealing the Royal Palm Estate sealed by the state government under the leadership of Governor Hope Uzodinma.

He added that the Senator and immediate past Imo State Governor was arrested for violently breaking into the government-sealed Royal palm spring estate along Akachi road in Owerri.

Ikeokwu further stated that police moved to the scene following a distress call that the Royal Palm spring Estate sealed by the government had been violently opened by men led by Okorocha.

Sources, however, at the Police headquarters which spoke with Vanguard said the former Imo State Governor would be charged to court tomorrow.

46 thoughts on “Moment Senator Okorocha Was Arrested By Police (Video)”