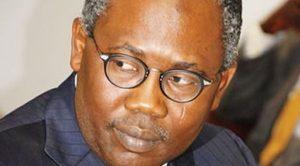 The money laundering trial of Nigeria former Minister of Justice, Mohammed Adoke has been Adjourned till  3rd  of August 2020

Naija News recalls that the embattled  Ex-Attorney-General of the Federation was dragged before by the Economic and Financial Crimes Commission (EFCC), Justice Inyang Ekwo of a Federal High Court alongside an Abuja businessman, Aliyu Abubakar, on a seven-count charge of money laundering.

He was also accused of using N300m which was alleged to be part of the proceeds of unlawful activities, acts classified as offences under the Money Laundering Prohibition Act 2011.

However, while defending himself earlier today, Adoke and Abubakar pleaded not guilty to the seven-count charge of money laundering as both prosecuting and defending counsel appealed for more time to get more facts on the case as revealed by EFCC.

They prayed the court to allow the defendants to continue to enjoy the bail earlier granted them. Justice Ekwo agreed to the request and adjourned till August 3 for the commencement of trial.