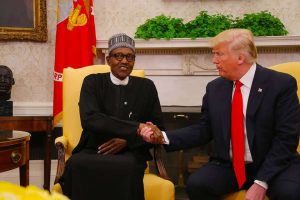 Naija News reports that Buhari had revealed what he told Donald Trump about the alleged killing of Christians in Nigeria.

He noted that he told President Trump that the problem between cattle rearers and farmers in Nigeria was a cultural thing rather than ethnicity or religion, adding that the issue has continued to fester due to the leadership failure of past governments in the country.

Buhari who digressed from his prepared speech noted that “I believe I was about the only African among the less developed countries, the President of United States invited, and when I was in his office only myself and himself, only God is my witness, he looked at me in the face, he said ‘why are you killing Christians?’

“I wonder if you were the person how you will react. I hope what I was feeling inside did not betray my emotion.

“So, I told him that the problem between the cattle rearers and stagnant farmers I know is older than me not to talk of him (Trump). I think I am a couple of years older than him.

“With climate change and population growth and the culture of the cattle rearers, if you have 50 cows and they eat grass, any route to your water point, they will follow it, it doesn’t matter whose farm it was.

“The first republic set of leadership was the most responsible leadership we ever had. I asked the Minister of Agriculture to get a gazette of the early 60s which delineated the cattle routes where they used meagre resources then to put earth dams, wind mills even sanitary department.

“So, any cattle rearer that allowed his cattle to go to somebody’s farm is arrested, taken before the court, the farmer is called to submit his bill and if he can’t pay, the cattle are sold, but subsequent leaders, VVIPs (very very important persons) they encroached on the cattle routes, they took over the cattle rearing areas.

“So, I tried and explained to him, this has got nothing to do with ethnicity or religion. It is a cultural thing which the respective leadership was failing the nation.”

Reacting on Wednesday, the Christian Association of Nigeria (CAN) told Buhari that killings in Nigeria is not cultural.

The Christian body also described Buhari’s revelation of his conversation with Trump as weak.

But MURIC in a statement to Naija News on Thursday accused CAN of selling the country to the US.

MURIC, in the statement signed by its Director, Prof Ishaq Akintola warned Trump against bullying the Nigerian President for whatever reasons.

According to MURIC, Trump’s question was based on false and misleading reports which CAN has allegedly been sending to the outside world..

“Again, it is not Christians alone that are being killed. Muslims are also victims. This is the same false information that was spread about Boko Haram,” MURIC said.

MURIC pointed out that Boko Haram as a terrorist group is killing emirs, Imams, Islamic scholars and ordinary Muslims too and also destroying Islamic worship centres.

Akintola said: “The crisis is mainly between herders and farmers, not between the government of Buhari and Nigerian Christians. So how can anyone accuse President Buhari of killing Christians?”

MURIC also noted that the herders-farmers clashes predate were there before the administration of President Buhari came into being in 2015 and has been occurring for a very long time.

It wondered why the Christian Association is making the situation look as if Buhari, a Muslim president is killing Nigerian Christians, adding that CAN is selling the country too cheaply to the US.