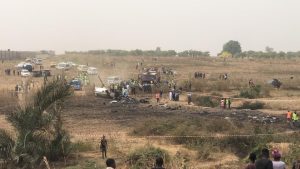 The Nigerian Air Force (NAF) has confirmed the death of all 7 personnel on board a military aircraft that crashed on Sunday afternoon.

According to a statement by the NAF spokesperson, Air Vice Marshal Ibikunle Daramola, the crash was caused by a reported engine failure.

The statement added that the Chief of Air Staff, Air Vice Marshal I.O Amao commiserates with the families of those who lost loved ones in the crash while urging the entire public to remain calm as investigation into the matter has been opened.

The statement reads: “This is to confirm that a Nigerian Air Force (NAF) Beechcraft KingAir B350i aircraft crashed while returning to the Abuja Airport after reporting engine failure enroute Minna. First responders are at the scene. Sadly, all 7 personnel on board died in the crash

The Chief of the Air Staff (CAS), @CAS_IOAmao, has ordered an immediate investigation into the incident. While urging the general public to remain calm & await the outcome of investigation, the CAS, on behalf of all NAF personnel, commiserates with the families of the deceased.”

It was gathered that the military plane was en route to Minna, Niger State.

Meanwhile, the Accident Investigation Bureau (AIB) has said it cannot investigate Sunday’s military plane crash in Abuja because it does not investigate military incidents or accidents except when invited.

General Manager, Public Affairs, AIB, Mr Tunji Oketunbi, made this known in a message sent to The Punch.

He stated this in reaction to the crash of a jet operated by the Nigerian Air Force in Abuja earlier today.

The AIB which is the investigating commission in charge of all aviation-related accidents and incidents in Nigeria, said it does not investigate military accidents except when invited.