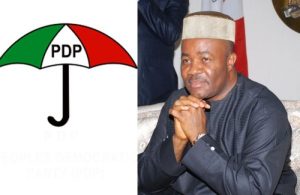 Naija News reports that the opposition party made this call following several fraud allegations against him in the corruption saga rocking the Niger Delta Development Commission (NDDC).

Apart from Akpabio’s suspension, the PDP is seeking the disbandment of the Interim Management Committee (IMC) of the NDDC where officials are alleged to have engaged in looting of funds.

In a statement on Friday by its National Publicity Secretary, Kola Ologbondiyan, PDP said with the massive allegations of corruption, treasury looting, recklessness and manifest public unruliness of the NDDC management, the Minister and the IMC have become a huge embarrassment not only to the Buhari administration but also to the Niger Delta region and the nation at large.

The opposition party stressed said that although the President has ordered a speedy and coordinated investigation of the activities of the NDDC management, such an important probe cannot yield any credible result as long as Senator Akpabio and indicted IMC are still in charge in the commission.

PDP maintained that the immediate suspension of the Minister and members of the IMC was the only way to ensure that such individuals do not interfere with investigations or tamper with vital documents.

The main opposition party argued that Akpabio’s suspension should be a prelude to unhindered investigation and prosecution of all those indicted in the wholesale fraud in the NDDC, which has hindered the commission from delivering its mandate to the people of the Niger Delta region.