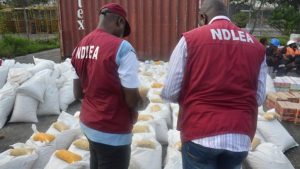 The state command revealed that it seized 603.24 kilogrammes of illicit drugs in different parts of the state in recent operations.

Speaking with newsmen on Thursday morning, February 25 in Minna, the state capital, the Acting Commander of the agency in the state, Mr Isaac Aloye, said the drugs seized from the suspects included: 601.443 kg of Cannabis Sativa, 0.0024 kg of Tramadol tablets and 1.8 kg of Exol- 5, valued at about N18.7 million.

Aloye told reporters that the agency has already charged to court five of the arrested suspects while three were under investigation.

He said: “We have succeeded in raiding and dislodging the dreaded uphill joint and Maitombi joint where the illegal sale of drugs takes place.

“We have also arrested 27 drugs users at different joints who were counselled on the dangers of illicit drug use and later released to their parents.”

Aloye added that the agency would not relent in frustrating the activities of drug peddlers in the state and the nation at large.

Meanwhile, no fewer than eleven persons have been arrested in Osogbo, Osun State capital over a clash between two groups of hooligans suspected to be cultists.

The State Command of the Nigeria Police Force confirmed the arrest of the suspects to newsmen on Wednesday, February 24, Naija News reports.