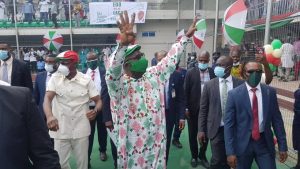 Edo Governor Godwin Obaseki has once again described his victory at the recently concluded polls at the state as wake up call for quality leadership and Sacrifice. He also  stated that there is no division among political parties in the state, assuring that he will carry everyone along in his government.

He gave the assurance in Benin, the Edo state capital, during an event with the theme: “Together,” organised to celebrate Nigeria’s 60th Independence Day.

In attendance at the event were Speaker Francis Okiye; Chief Judge, Justice Esther Edigin; Edo Chairman of the Christian Association of Nigeria (CAN) Bishop Oyonude Kure and the Chief Imam of Benin Central Mosque, Alhaji Abdufatah Enabulele, among other dignitaries.

Obaseki said: “Our victory in the just-concluded governorship election does not mean that we should isolate ourselves.

I cannot achieve what you expect of me without you. All of us are coming together to build Edo of our dreams. In our quest to build a Nigeria of our dreams, we have started the process by bringing people together.

“We do not have any political divide in Edo State. All the political actors believe that Edo should move forward. On my part, God has made it possible for me to be the governor of the state and I am grateful to Him.

“What that means is that I have responsibility to every Edo citizen and every Edo resident, whether they voted for me or not.

I will do my part with your prayers and with God on our side, we will rebuild Edo and in doing so, we will be building one strong united Nigeria.

“If not for God, we would not be celebrating Nigeria at 60. There are not very many countries in the world that have gone through the same experiences as we have in the last sixty years. There is frustration in the land, there is anger, but there is hope for Nigeria.