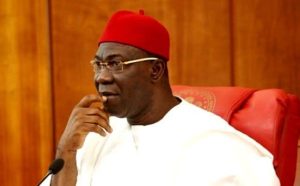 Former Deputy Senate President, Ike Ekweremadu, on Thursday, noted that with the right political will, the amendments to the constitution to achieve decentralised police, Nigeria can have state police within ten days.

The Chairman of the Peoples Democratic Party Committee on Electoral Reforms and Constitutional Amendment, stated this while speaking at the inauguration of the committee at the PDP National Headquarters, in Abuja.

Ekweremadu further stated that there had been a general agreement that the current centralized system of policing has failed woefully.

He said, “The weaknesses in our structure and the Constitution we operate, have never been as pronounced as they are today. Some of us forewarned that feeding bottle federalism would only continue to increase our appetite for wealth sharing and guzzling, kill our propensity to create wealth, make us poorer. It is regrettable to say that the chicken has come home to roost.”

“In the absence of state police, the security of lives and property has practically collapsed. So long as we run a dysfunctional centralised policing, for that long will our insecurity-induced pains and losses continue to rise. The community policing initiative is illusory, cosmetic, ephemeral, inorganic, and will certainly not change anything.”

“With the right political will, the amendments to the Constitution to achieve a decentralised police and secure lives and property can be achieved 10 days.”

Meanwhile, popular Yoruba activist, Sunday Adeyemo, also known as Sunday Igboho, has revealed what must be done to end the quit notice he gave to Fulani herdsmen.