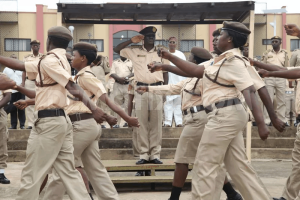 The Comptroller General of the Nigeria Immigration Service (NIS), Muhammad Babandede, has said 70,000 applicants were invited for examination in the service ongoing 2020/2021 recruitment.

Speaking in Yola, the Adamawa State capital, Babandede said only 50,000 appeared and sat for the examination across the country.

He stated this on a two-day official visit, during which he inaugurated a Sick Bay Centre and a Forward Operation Base (FOB) at Gurin and Belel in Fufore and Maiha Local Government Areas respectively, NAN reports.

He said that 6,000 candidates would be shortlisted for final physical screening and only those that are fit and qualified will be recruited as officers of the NIS in the next two weeks.

According to him, he assumed office in 2016 and ensured that no vacant position was sold to the children of the rich.

Babandede said that recently, 370,000 people applied for the 4,900 available vacant positions from across the country for the 2020/2021 recruitment.

“After an intensive screening, we invited 70,000 applicants for examination and 50,000 appeared and sat for the examination.

“We shortlisted 6,000 candidates for final physical screening and only those that are fit and qualified will be recruited as officers of the Service in the next two weeks.

“We will make sure we do justice and the appointments will be shared equally among all the 774 local government areas of the country,’’ Babandede said.

Babandede recalled that in 1985, he got recruited into the Service without knowing anybody or any top government official.

He vowed to restore the lost glory of the Service for the betterment of our future generation.