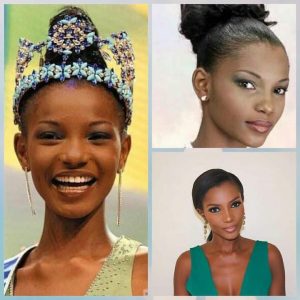 In 2001, Nigeria’s Agbani Darego made history when she was announced as the Miss World.

She was the first black queen to win Miss World in a very captivating fashion.

However, today, social media is on a meltdown as Google Search shows Darego as ugliest Miss World.

First noticed by a Twitter user with the handle, Growth Queen, she said: “I find it interesting that the results to “Who is the most beautiful Miss World” on Google shows links to various rankings. But “Who is the ugliest Miss world” gives you Agbani Darego’s profile, full stop.”

I find it interesting that the results to “Who is the most beautiful Miss World” on Google shows links to various rankings.

But “Who is the most ugly Miss world” gives you Agbani Darego’s profile, full stop. pic.twitter.com/HFcto0vQLr

This was Agbani Darego when she was crowned Miss World in 2001.

How she shows up on google as “the ugliest Miss World” is just beyond me. pic.twitter.com/UDTOG7aWcx

Agbani Darego appreciation post:
I don’t care what anybody says, this is the most beautiful Miss World for me pic.twitter.com/GCkCZYKs3N

Two VP’s at google have seen my Agbani Darego tweet and said it will be looked into. It’s shameful but we move.

I can’t believe some Nigerians were in my mentions saying all black people know how to do is complain. It is well

Unpopular opinion: Agbani Darego is the most beautiful Miss World ever

Let’s not lie, Agbani Darego is a beauty Queen.
Black is gold

One of the most amazing moments of my life was watching Agbani Darego win Miss World in 2001. I remember watching it on our black TV that year and when she won, I could hear people scream. It was so unexpected and the love was pure. Amazing time.

As a Nigerian lady if you are called Agbani darego, you must be really beautiful to earn it

Google is just a search engine, it only display what bloggers and webmasters published about Agbani Darego.. Google is not to be blamed but the actual hungry publisher. IMO

Google ranking Agbani Darego as ugly has more to do about us as a people than about racism. It shows that in the past years we’ve not been having online contents that describes the beauty of Agbani Darego. What has the media been saying about her? What aspect of her has our black

Fun fact: Priyanka Chopra was the one to pass the crown to Agbani Darego. She was Miss World 2000 and Agbani won it in 2001. https://t.co/NkxB1k5OWy