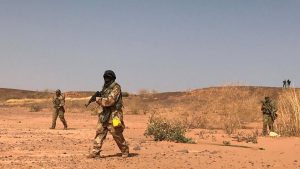 11 hostages including four children have been rescued from Boko Haram captivity by troops from neighbouring Niger Republic, local officials confirmed on Monday.

The victims were rescued on the Nigerian side of the Lake Chad just as their families were about to pay a ransom of two million CFA francs (3,600 dollars) to the captors.

Naija News understands the victims were kidnapped on August 11 and August 12 in two villages in Gueskerou, a district on the Niger side of Lake Chad.

The Secretary of the Diffa Region Governorate in Southeast Niger, Yahaya Godi, said “the hostages were freed by our troops on the Nigerian side of Lake Chad, near a Boko Haram base.

“There are 11 people, including three women and four children, two of them babies, who were seized by the Boko Haram terrorist group,” AFP reported.

The soldiers also recovered guns and ammunition from the terrorists during the operation.

The Boko Haram fighters usually attack villages and communities in the Lake Chad region and take advantage of the porous borders to move them into other countries to avoid the searching eyes of troops and then demand ransom for their release.

Naija News reports that Zulum had accused soldiers of being behind a recent attack on his convoy in Baga.

He also accused the Nigerian military of engaging in farming activities in the town.

But the military after an investigation into the attack said the governor’s claims were untrue. The military stated that the attack was carried out by Boko Haram members.