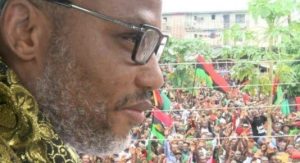 The leader of the Indigenous Peoples of Biafra (IPOB), Nnamdi Kanu, has said he is ready to stand trial at the International Criminal Court (ICC), in Hague, for defending Biafrans against killer Fulani herdsmen.

Speaking during a live broadcast on Radio Biafra Sunday night, Nnamdi Kanu slammed foreign nations for turning a blind eye to the atrocities committed against south-easterners in Nigeria.

Nnamdi Kanu said killer herdsmen and terrorists have continued to raid communities in the region unchallenged by the security agencies.

”Herdsmen will attack us, rape our women, destroy our farms and kill our farmers nobody will arrest them but when we try to defend ourselves, government will come after us rolling out the tanks and using their helicopter gun boats”, he stated.

Kanu explained that the incessant unprovoked genocidal attacks by herdsmen and the docility of the Nigerian Authorities gave rise to the formation of the Eastern Security Network (ESN) to protect the hapless Biafran locals against terror.

But he regretted that instead of going after the perpetrators of the heinous crimes against innocent citizens, the Nigerian State rather chose to declare war against mere vigilante volunteer group as demonstrated in Thursday’s air  strike in Orlu.

The IPOB Leader who said that the Orlu military raid marked the beginning of the second Nigeria/Biafra war vowed to mobilise the people in defense of their ancestral land “no matter the consequences”.

“If defending our ancestral land against conquest by Fulani Janjaweed invaders will take me to the Hague I am ready to go to the Hague”, Kanu said.

According to him world leaders ought to have demanded probe of Nigerian Leaders including some Northern Governors and Islamic clerics over their romance with bandits.