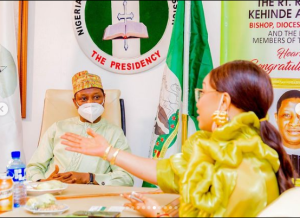 Popular Nollywood actress and mother of one, Tonto Charity Dikeh has reacted to the claim by the Nigerian Christian Pilgrim Commission (NCPC) that the commission did not appoint her as its peace ambassador.

Dikeh had taken to her social media page, Instagram precisely earlier to disclose that she was given the fresh appointment by the NCPC on Thursday, 25th February 2021, Naija News reports.

The actress revealed this sharing photos of her self with Rev. Yakubu Pam, the Executive Secretary of the commission and other officials of the Christian body.

However, a statement coming from the NCPC moments later described as untrue the claim by the Humanitarian. In the communique in which copy was made available to newsmen, the commission said though Dikeh was at Rev. Pam’s office on Thursday, February 25 but that her claim which has gone viral on the internet is untrue of what transpired.

Rev Pam who reacted to the development, said Dikeh’s report is a total misrepresentation of what transpired between her and the commission on Thursday. The Christian leader revealed that the actress who is the founder of Tonto Dikeh Foundation had expressed her willingness and interest to partner with the Commission in the area of peacebuilding.

In her reaction to NCPC’s official statement which denied her as being appointed as an ambassador with the commission, Tonto Dikeh again took to her verified Instagram page to say she chose to respect the commission’s decision and take the fall.

She said though there were video proofs of what transpired at the commission’s office during her visit, but that she will leave everything to pass and walk away with her head up.

She wrote: “My name is King Tonto Dikeh! Best believe I will never lie on a human being talk more of a Commission of a Federation.

I will only simply say this life we all know what can go wrong in 1sec. but we moveeee… There are video proofs, but I would Rather respect the commission’s decision And take the Fall.

She added: “Coming from a place of leadership and peace I wouldn’t fight this but I will walk away with my head held high and grow above it. Thanks to every Christian body that fought against this Growth.

See her reaction below.