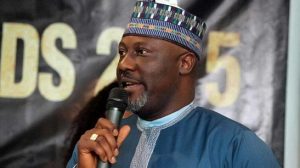 He wrote, “Confirmation of service chief: Shame on the Senate who just confirmed that the Nigerian Senate is a department of Aso Rock and the Presidency.”

“Confirming those you recommended for sack more than once for gross incompetence as Ambassadors is a SHAME. SDM”

Recall that the Senate on Tuesday confirmed the appointment of the former Service Chiefs as non-career ambassadors-designate.

The confirmation of the nominees followed consideration of the report of the Committee on Foreign Affairs.