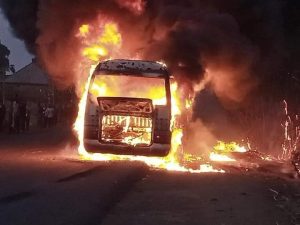 A supposed joyful sports trip has been disrupted as bus conveying Wikki Tourists players and club officials burst into flames.

It was gathered that the incident happened on Thursday morning, February 18 while the sportsmen were travelling to Akwa Ibom to play against Dakkada FC.

Naija News understands that the players were on their way to Uyo, the state capital for their Nigeria Professional Football League (NPFL) clash against the state-owned football club.

Though the cause of the fire is yet to be ascertained, Wikki players announced on social media that the bus did lose two tyres at Hawan Kibo, a town near Jos, Plateau State just before the fire started.

However, the players and staffs are said to be in good condition as they escaped before the flames.

In another news, the Kano State Hisba Board has reacted to the arrest of its commander, Sani Rimo, with a married woman inside a hotel in the state.

Naija News reports that men of the state Police Command caught the Shariah police official with the married woman in Downtown Hotel in Sabon Gari area of Kano metropolis on Monday night.

Rimo, the officer in Charge, Anti-begging, was arrested when the husband of the woman he was allegedly having an affair with filed complaints.

However, according to the Board’s Public Relations Officer, Lawal Ibrahim, the agency has set up a five-man committee to investigate the allegation levelled against Rimo.